Scroll to the bottom to view a video interview with James and Vida!

Nineteen years ago, when Vida read about Crossroads in her church bulletin and decided to get involved, she had never met anyone in prison.

Five years into Vida’s mentoring journey, a man named James was admitted to a prison a few hours from her. It was there that he picked up a Crossroads lesson someone had left at the mail counter and then reached out to us for an enrollment form.

A few years later, in 2011, their paths crossed when Vida received an envelope with James’s Tier 2 application. With two other lessons sitting on her desk, she picked up the phone to call Crossroads and communicate that she didn’t have the time to take on another student. But then she noticed the date on James’s enrollment form. “He had applied in March, and this was July, and I just did not have the heart to say no,” she told us. “So, I accepted him, and I was so thankful. He absolutely was the most inspiring student that I’ve ever had.” 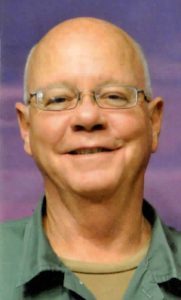 James, one of Vida’s former students

In his enrollment form, Vida read James’s words about how he had come to accept Christ through interactions with his cellmate, a young man who exuded peace and contentment amid the chaos of prison life. “Each night after we were locked in our cell, he would have me read a part of the Bible out loud. Then he would ask me questions about what I’d read,” James had written.

“It was with [my cellmate], in that place that I came to Jesus, that I confessed my sins and promised to know Him and follow Him the rest of my life. I have never looked back,” James explained. “I know God placed me in that cell with him for a reason. I know I have been placed in prison for a reason. I know I want to be a part of a prison outreach after my release.”

As James dug into the Gospel with his mentors over the years, he learned how deeply God loved him, and he was amazed.

In a Zoom interview we facilitated recently between James and Vida, he told us, “I had known of [the Gospel message] from growing up in the church as a kid. But I never experienced it, I never felt it, it was never personal to me. I was simply a congregant. [Crossroads] made Jesus personal, made Him alive, made Him there beside me, listening to me, supporting me and loving me despite what I had done.”

After exchanging letters and lessons with Vida for over three years, James graduated from Tier 2, and they said their goodbyes. When applying for the Tier 3 program, James spoke glowingly about Vida and her impact on his life. He wrote in his application, “I could feel her presence, her connection to God, the conduit that she provided for me to Him. She gently led me to a deepening relationship with God and an appreciation for all that He is and all that He does. . . . I can only hope to emulate her more. I want to make her proud of me, of her student. [Vida] led me to feel God, to know Him through His very presence.”

In his Tier 2 application, James had shared his desire to participate in prison ministry after his release. Ten years later, his application to serve as a Crossroads mentor was approved.

In a letter Vida sent to us recently, she wrote, “I’ve had many Tier 2 students, but never one like James. I have prayed for him every day since his goodbye letter in 2014. He was released in 2016, and I had no idea what had happened to him until a friend reconnected us about two years ago.”

When we learned that James and Vida had miraculously reconnected by mail through a mutual friend and that James was pursuing mentorship, we arranged the interview with them. “I’m so thrilled that he’s going to become a mentor,” Vida told us on our call.

James told us, “Part of the inspiration that Vida gave me was if I could be to one person what she has been to me, I will bless that person’s life in amazing ways. I really just want to be another Vida. I want to be able to give to others what she gave to me.”

As we continued to talk with James and Vida, it became clear that the words they shared through the mail had been inspired by the Holy Spirit.

“I think it is worth saying that it’s not so much the exact words themselves [that Vida wrote], but the feeling that came with those words,” James explained. “There was a sort of magic there, if I can use that word—a connection that put me right in front of the Lord. . . . It’s not that you have to say so much, or that you have to do so much, but that you are there and that you understand my burden. And that, through your example, I can find the strength and the courage that I need. Vida saved my life; she saved my soul. I don’t know how you can thank someone for that adequately.”

“She is a very, very special person in my life and will always be my mentor,” James said, choking back tears.

It would have been easy for Vida to ignore the bulletin announcement all those years ago or to consider herself unqualified to minister to incarcerated people, but she listened to the prompting of the Holy Spirit and God’s call to visit those in prison (Matthew 25). And she said yes. 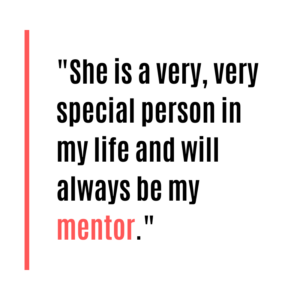 “I feel like [mentoring] is doing the work that the Holy Spirit has really inspired me to do, and especially as the years go by. . . . I just feel a touch of the Holy Spirit when that letter goes in the envelope and the stamp goes on and goes into the mail,” she shared. “And it’s nothing that I feel that I do personally. I think it is all through the work of the Holy Spirit. And I’m ninety-two years old . . . I feel like the Lord has let me continue on with something I can still do.”

Despite Vida’s inexperience with prison ministry, God equipped her to do the work He had set before her. This is the story that we’ve heard from countless mentors: that when they sit down to write letters to their students, the words just start flowing—words that our students, in turn, say came at just the right time. Because of the faithful obedience of mentors who’ve followed the prompting of the Holy Spirit to remember those who are in prison and visit them through their letters, lives are being transformed.

Like Vida before she began mentoring through Crossroads, you might not know anyone who has been to prison. You might feel unqualified to support people behind bars, but we encourage you to step out and visit those in prison anyway. As our mentors can testify, you will experience the Holy Spirit at work. You can encounter the presence of the Lord through the simple exchange of a letter.

You can watch James and Vida’s full interview here:

Are you feeling led to join us in this important and transformative work? Consider donating to Crossroads or signing up to become a mentor.