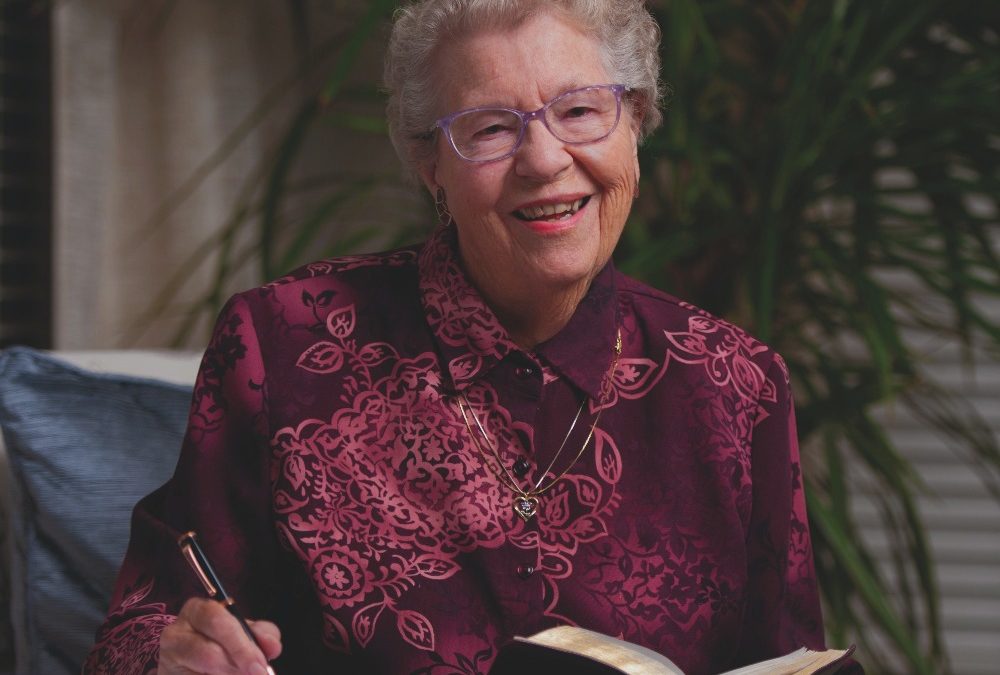 Vida Burgess has been a Crossroads mentor for 16 years, touching the lives of hundreds of men and women in prison. She also promotes the ministry every chance she gets, inviting people to experience the blessing she has experienced through writing to prisoners. We interviewed Vida to find out what she appreciates most about her ministry through Crossroads.

Q: How did you first find out about Crossroads Prison Ministries?

A: I began working with Crossroads in 2003. At one of my church’s services in New Port Richey, Florida, I met a woman who was involved with Crossroads. Soon after getting connected, I became a mentor coordinator. In this role, I had about 30 who became mentors at the church. I helped organize the class to teach people how to be a mentor. That’s how I got started. I am both a mentor and a recruiter of mentors.

We later moved to Shell Point Retirement Village in 2011. There are 2,400 residents here, and the church here is very mission-minded. I was grateful for the opportunity to spread Crossroads ministry in a new place. At the church, I spoke at one of the services about Crossroads. This helped gain eight more mentors. Later, someone in leadership reached out to me to see how Crossroads could be more fully integrated into the church. This has really been an answer to prayer. We have nearly doubled our mentors here at Shell Point, and it is amazing to see the church support Crossroads financially and prayerfully.

Q: How many students have you had over the years?

A: I keep the names of all my students in my notebook. I have mentored about 10 Tier 2 students. The number of Tier 1 students I have mentored is in the hundreds. Mentoring for 16 years has allowed me to have many students. I average writing to a student once a week.

Q: Do any of your students stand out to you?

A: A student named James jumps into my mind. He started out not having any church background at all. One of his cellmates led him to the Lord and introduced him to the Crossroads Bible study. He became so captivated by the Word of the Lord, which I saw in his letters to me. He would type two- to three-page letters of his observations and conclusions from the Scriptures he read. He was just the most amazing person.

His letters clearly showed his transformation. When he first became my student, it was clear he was very well off in his life before prison. He worked for the city government, and he told me all about what he had lost — his house, his car, his family, his friends and all his possessions.

A couple years later, I received a letter that was just the opposite. He told me, “Things are just things, and knowing what will become of my soul is what is so meaningful to me now. I have freedom and joy and completeness without ‘things.’ I feel complete. What an extraordinary God we have!” He now thinks of loss as more of a blessing, because it means he has to depend completely on the Lord. He told me he would accept a life sentence before giving up his faith. James was just so amazing and inspiring.

Q: What is it about the mission of Crossroads that resonates with you?

A: I have considered my work with Crossroads such a blessing. I have had so many students—mostly those doing the Tier 1 and Tier 2 lessons. It takes most students about three years to complete the Tier 2 lessons. The growth that I see in them in that amount of time is just amazing. The same is true of students in the Tier 1 lessons. I think some of them start out because they just want a connection with someone, but then I get to see that grow into a desire to learn more about the Lord. It is incredible to witness their realization of how much the Lord loves them.

I had one Tier 2 student who wouldn’t answer any question that I would write him. He couldn’t believe that anybody would care enough to spend that much time writing to him, so he wouldn’t answer me. However, he became one of my most precious students. I remember the last letter that he wrote me, telling me he was sitting in his cell crying, overwhelmed by the love of the Lord. The spiritual growth that I witness in these students is the most inspiring to me. I feel a real kinship with them. Crossroads facilitates these Christ-centered relationships between mentors and students, and I am so thankful for this mission. It’s really hard to say goodbye to my students after I’ve worked with them for so long, and that speaks to the wonderful relationships that are formed.

Want to make a difference in the lives of men and women in prison? Consider becoming a Crossroads mentor.