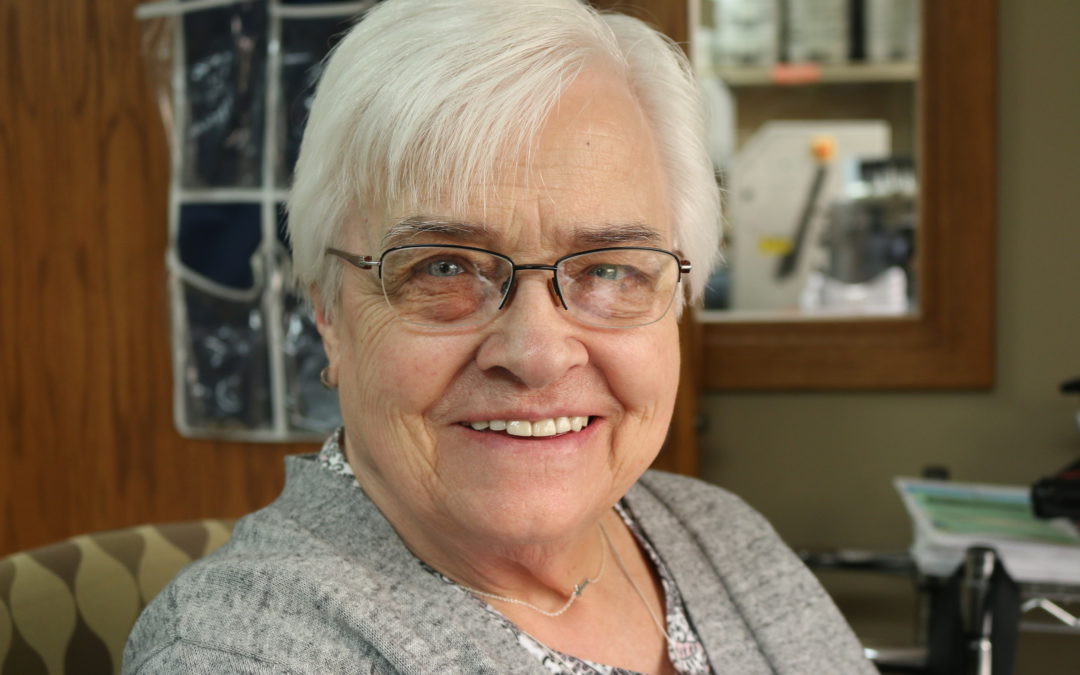 When Fran was first approached about becoming a volunteer mentor for Crossroads Prison Ministries 23 years ago, she worried that she wasn’t qualified to teach men and women in prison about the Bible.

“I wasn’t sure if I could do it. I wasn’t confident in my knowledge of the Scriptures. There was a language barrier,” said Fran, who is from the Netherlands.

But she quickly realized that prisoners didn’t need a Bible tutor. They needed a friend.

Be a friend? That she could do.

As she began reviewing students’ Bible lessons and exchanging letters with them, she realized she had found her calling. “I love people. I love being connected with people,” Fran said.

As she exchanged letters with her students, Fran developed very close friendships.

One of those students was a man on death row, named Steve. As Steve began to share about his life, Fran felt a deep sense of compassion for him.

“He lived in a dungeon. It was a basement cell that was damp and at times it would leak and was wet. He was worried about his wife,” Fran said. “I really felt for him and what he was going through. I developed a close bond with him.”

Fran developed this close friendship through sharing about her own life. “I am very personal in all my letters. I shared about a granddaughter who was severely handicapped. We had two children who were struggling. I asked prayer for that. I had surgeries and asked prayer for that,” she said. “I share my joys and also my struggles.”

By being open and vulnerable with Steve, she created trust. And Steve began to share about his own life – his struggles, his passions and his dreams. One of those dreams was to pursue a doctorate in theology.

“I told him he should go for it, that God is with him. And years later I found out that he had gotten his degree,” Fran said with the smile of a proud mother.

In a recent letter to Fran, Steve wrote: “Fran, I wish I had the ability to tell you how great an impact you’ve had on my life. I remember you and your loved ones in my daily  prayers.”

Fran has developed friendships so deep with some of her students that a few of them have started to call her mom. “Now I have a student who call me his spiritual grandmother. So I guess I’ve been promoted,” Fran said with a laugh.

One of the students who calls Fran his spiritual mother is Robert. “Right now, I am the only one in his life. His wife left him. His family abandoned him,” Fran said.

Robert has struggled with bouts of depression, and Fran has been a voice of encouragement and hope. “I tell him, ‘God isn’t done with you. He’s using you,’”

Over the years she has been a Crossroads mentor, Fran has been through a lot. She has had physical problems, watched family members struggle and lost her husband. But a constant in her life through all of that has been studying God’s Word alongside murderers, thieves and drug dealers.

In the process, prisoners have become more to Fran than their crimes. She now sees them as they truly are — people, created in the image of God. And not just people but friends.

“I have stuck with it for so long out of the desire to be there for them. I mean something to these people and they mean so much to me,” Fran said. “By being a mentor and going through their struggles with them, I have a totally different view about who they are.”

Being a Crossroads mentor has also transformed Fran’s life with God. “I’ve never felt as close to God as when I am writing prisoners. It has completely turned my spiritual life around,” Fran said.

Will you give the gift of friendship and encouragement to someone in prison? Click here to find out how to become a Crossroads mentor.