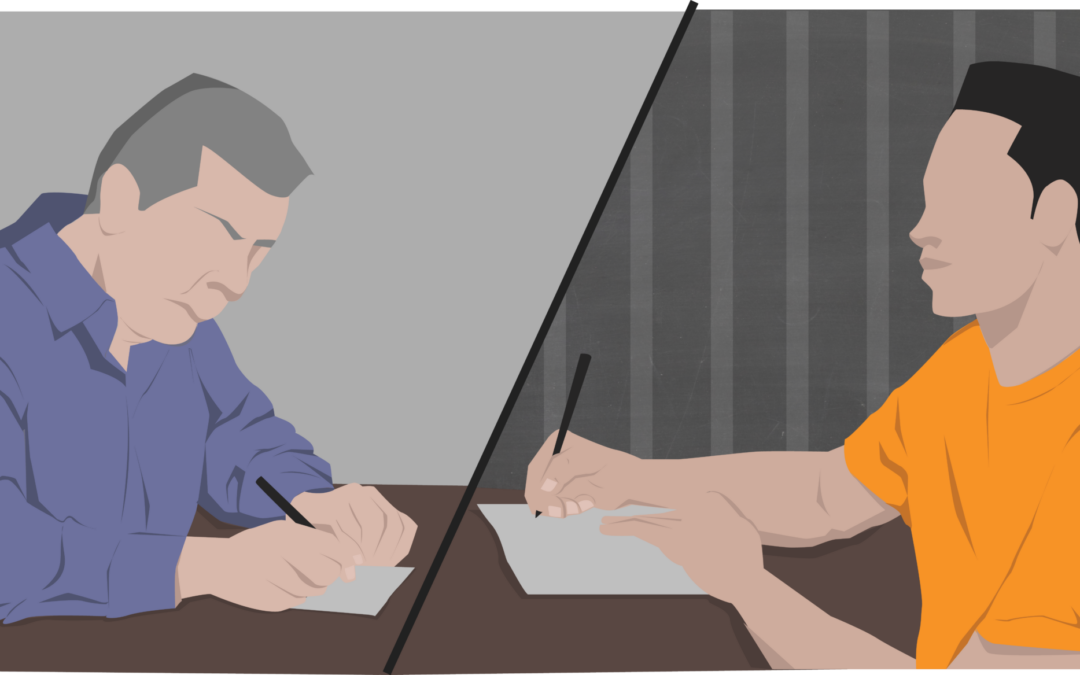 When Jerry wrote his first letter to Shep, he didn’t receive a response. He tried again—no response. After his third attempt, he received a hostile reply from Shep: “I never wanted no Christian pen pal; somebody put my name in as a joke!”

Eager to serve God from home while caring for his ailing wife, Jerry had signed up to write letters to people in prison through a ministry called Christian Pen Pals. Although Jerry had grown up in the Catholic faith and received a thorough religious education, he told us, “In all the philosophy and theology, I never heard the Gospel.” Years later, after reading a novel that piqued his interest in Jewish history, God brought him on a journey of discovering the truth of the Bible and the gift of salvation through the simple act of believing in Jesus.

Shep, on the other hand, was a Muslim with absolutely no interest in Christianity. In response to Jerry’s third letter, he wrote, “I am in Level 4 supermax. I just got out of solitary after stabbing a prisoner and trying to kill him. Wherever I go, I have four guards with me, and I’m shackled hand and foot.”

Undeterred, Jerry continued to write to Shep. “Now, I’m not writing letters soaked with ‘Christianese’ words and doctrine. I just told him that the Lord put it on my heart to write to someone,” Jerry said. “I told him about myself and about my life and asked him about his life.”

Surprisingly, Shep kept writing back. As the letters flowed between the two men, Jerry simply demonstrated to Shep that he was there for him and cared about him. “Of course, as our correspondence went on, who I was because of Jesus freely came out, but not in a preachy way . . . just being a friend,” explained Jerry.

About a year into their correspondence, Jerry received an unexpected message from Shep. “He told me he was baptized in prison! I had no idea that was coming,” Jerry shared joyfully.

Jerry wanted to disciple Shep, but he wasn’t sure of the most effective way to do so with the distance between them, so he began looking into correspondence Bible studies for people in prison. That’s when Jerry discovered Crossroads.

“I wanted a Bible study without a doctrinal slant,” he told us. “I got a few of your Bible studies; seemed doctrine was right on. So I signed Shep up for them. He devoured them. Went all the way through to the last level [Tier 3] . . . preparing for ministry.”

Jerry saw Shep’s faith in action as Shep described how he was attending and occasionally leading worship services in his facility and creating a fund to help those who were indigent buy toiletries.

“Then he told me about Big Ed,” Jerry shared.

Big Ed, Shep told him, was reclusive and guarded. He talked to no one, and no one talked to him. Slowly, Shep began reaching out to Ed in small ways, like leaving a dessert for Ed on the table as he walked by. Eventually, Ed opened himself up to Shep, and they became friends. Shep began reading the Bible with Ed, and they attended worship services together until Big Ed was transferred to another prison and Shep lost contact with him.

Eventually, Jerry also lost contact with Shep. “After he got out on parole, I lost track of him,” he explained. “I pray for him. The Lord knows.”

His journey with Shep moved him to become a Crossroads mentor. He has been mentoring students through Crossroads for about four years.

“It is really a joy for my life. As I read through their lessons, I often can get a feel for where the prisoner is at spiritually and what the need is in their life, and I can have the privilege of ministering to that need,” said Jerry. “If you stop to talk to someone at a shopping center or at a bus stop, how many times do you meet someone who asks you, ‘Sir, can you tell me, what must I do to be saved?’ But that’s what these prisoners are saying—maybe not in those words, but that is their heart cry. So, for me, it is a blessing and an honor to be able to give words to them, words that are directed by the Holy Spirit, right to their heart—words of life. What an incredible gift to me.”

Are you interested in sharing the Gospel with people in prison from the comfort of your home? Learn more about serving as a Crossroads mentor.