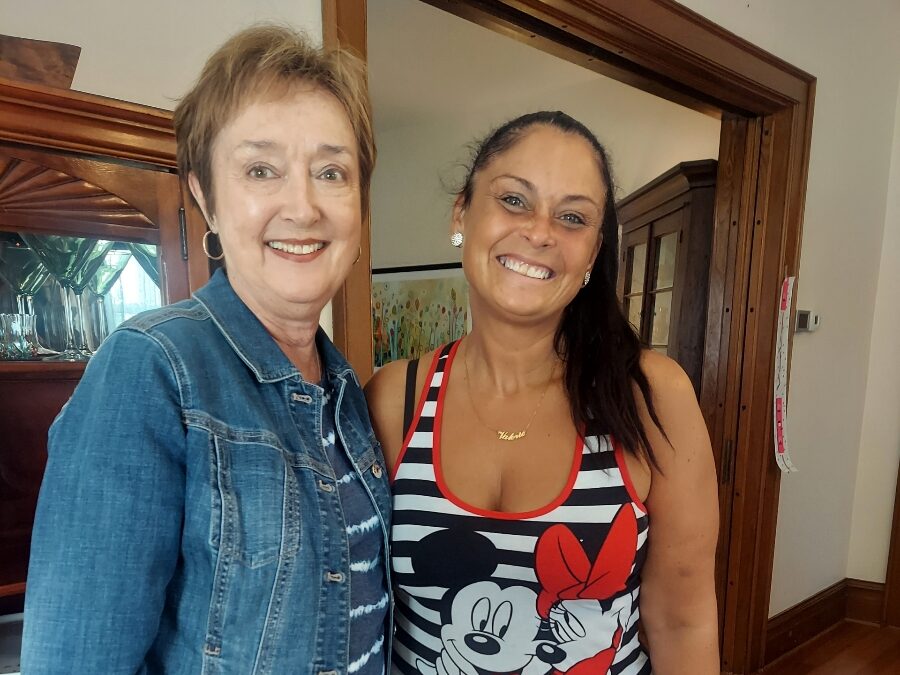 Judy de Vries-Wetters, left, had never met Valerie Todd before June 2021, but the two quickly discovered a connection through Crossroads. Judy is a longtime mentor, and Valerie was a student in the mid-1990s. (Photo compliments of Judy de Vries-Wetters)

Longtime Crossroads mentor Judy de Vries-Wetters was vacationing at a bed and breakfast in Lancaster, Pennsylvania, in June 2021. A women’s Bible study group from Philadelphia was also staying there.

One morning during her stay, Judy stopped to chat with the women after she heard them studying the Word and singing at breakfast. Over the course of the conversation, she learned that one of the women had been incarcerated in a Pennsylvania penitentiary in the mid-1990s.

Then Judy learned that the woman, Valerie Todd, had been a Crossroads student during her incarceration. They both were struck by the unlikelihood that two women with ties to a Grand Rapids-based ministry would cross paths in Pennsylvania.

Valerie spoke highly of the Crossroads program and credited it with helping her chart a new path for her life almost twenty-five years ago. It’s a path she has continued to travel faithfully ever since.

While behind bars, she wrote Inviting and Exciting: God’s Will, a thirty-day devotional book that she continues to use in classes she teaches in prisons in Philadelphia. She has been working with the organization Mothers in Charge for more than ten years, teaching classes to incarcerated women. She teaches in the very facility where she was once incarcerated.

“I can tell them the cell where I wrote my book,” Valerie said. “It’s like, pinch me so I know this is even real.”

Valerie was born addicted to drugs, and her early years were marked by abuse, neglect, and crime, which led her to prison. During her time behind bars, she heard the life-changing message of love and forgiveness through Jesus.

“I never felt love until Jesus,” she said. “I was hungry to learn, so I did all the courses I could. Now I like people to get an intimate relationship with Jesus and really feel security and safety and truth.”

For Judy, the unexpected opportunity to meet Valerie was an affirmation that mentors make a lasting impact as they support new believers in their learning.

“It was such a blessing and an encouragement to meet Valerie and hear how she was encouraged by many faithful Crossroads [mentors] to grow in her faith while she was incarcerated,” Judy said. “I am praising God for her and so thankful to be able to witness this amazing transformation.”

You, too, can make a lasting impact on someone in prison who is longing for the love and hope that only Jesus can provide. Please consider signing up to serve as a Crossroads mentor.