Imagine Kenya: Where Mothers and Children are in Prison 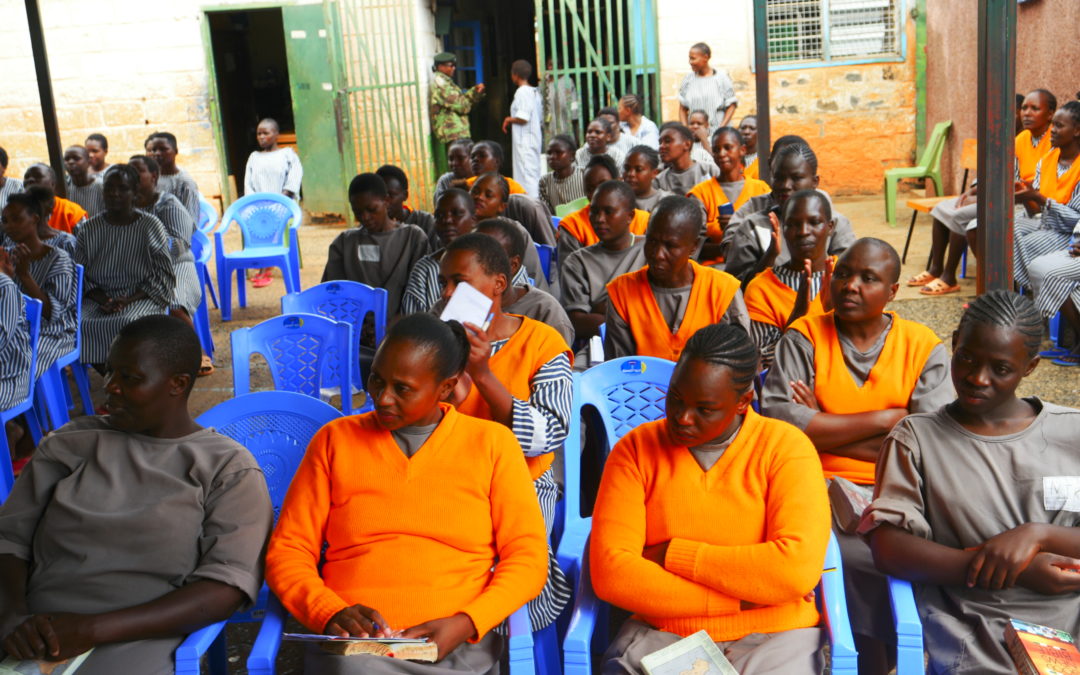 In some parts of the country, we claim to speak plain ole English, but when those of us who speak “plain” talk to those who are in Louisiana, we have to listen a little harder and might miss a word or two in conversation.

It turns out that the same is true in Kenya. A large part of the population speaks English. But I had to lean forward, watch their mouth and listen closely so I could understand most of the words and piece together the rest. Sometimes I asked them to spell things.

Cynthia (director of international ministries at Crossroads) pointed out to me that our US English has a strong accent for native Kenyans and they have to do the same thing we do to understand. Huh.

Our week in Kenya was full of opportunities to see the world from a different perspective other than my own. Like the day we visited Langata prison.

On this day, it is my turn to share the Good News. We enter the prison much the same way as the day before, stopping before the first gate. Jefferson Gathu (director of Crossroads Kenya) leaves the car to speak with the guards, who are holding large guns.

We’re granted permission to enter because Jefferson has done the work of going through the proper chain of command to request our visit. Once inside, we go to a second guard house, show our passports, hang the visitor passes around our necks and step into separate male/female rooms to be patted down and scanned. They don’t mess around.

They can’t mess around because they know what humans are capable of. Kenneth told us a story the previous evening about a prison where 1,000 men every single night lined up, backs to the thick brick border wall of the prison, and in unison banged their fists.

For six months straight, every single night the men banged on the wall. “One, two, three!” … BANG, BANG, BANG!

One night, the wall came crashing down.

No one ran away. They made their point. And then the guards made theirs. Stricter consequences were put in place. The wall was rebuilt. The guards don’t mess around.

We spend time with the officer in charge and her deputy. Jefferson introduces us. We’re told we are most welcome. We take time to pray for the prison staff and the prisoners. Not casual words, not half-hearted prayers, but sincere thanks, requests for the favor of our good Father.

Honestly, I spent more time in prayer with people this week than I have in a very long time. Everything we did was bookended with prayer. We didn’t leave for our journey in the morning or on the way home without it. We prayed with staff, over inmates, before a meal and when we left each other’s company at night. The Crossroads Kenya team is serious about calling on the Lord, giving God glory, praising Him for all He has done and will do.

I learned a thing or two about prayer again.

Crossroads Prison Ministries brought me along on this trip to tell you the story of what they are doing internationally. I will continue to tell you stories until I run out. Or until they tell me to stop!

What comes most naturally to me is to tell stories in person. I have been a speaker for close to 25 years and a writer for only a couple of years.

On this day, I get to speak in the medium-security prison gathering space that holds around 100 or so. The same thick brick walls border our space, but this time black and white striped dresses and bright orange sweaters hang from barbed wire hooks at the top of the wall. They’ve been washed and will dry on the line.

Following worship, led by someone clapping and banging a small hand drum (that I secretly wish I could play for a minute), Jefferson greets the women and introduces the Crossroads Kenya team.

Jefferson’s wife, Beth, speaks first, encouraging the women in Kiswahili (their native tongue), her tone urgent and her body language so full of love and kindness.

Then it’s my turn. And I begin by sharing about how as a young woman, all I ever wanted to be when I grew up was a mother.

There are mothers and mothers-to-be in the crowd. Truthfully, the babies are distracting. I secretly want to hold them on my lap. I smile at the moms and they smile back, proud of their littles.

My story is one of having to wait for years before I would have that one thing I knew I wanted. When I share the revelation of our pregnancy ultrasound and the doctor’s pronouncement of not one, (women clap), not two, (clapping louder), but three babies in my belly, I get something akin to a standing ovation.

Their enthusiasm shocks me. Another different perspective hits me hard. They hear that news as a sign that I was a woman greatly blessed.

I’m now very concerned because I know, and they don’t, where this story is going. I have to tell them the part where my triplets were born early, and though they lived briefly, now reside in the presence of Jesus.

I speak about anger, sadness, confusion and the path of bitterness I was headed down. I ask if they have anger, fear, sadness or bitterness in their heart. I see serious faces, heads nodding. I tell them about a walk I took six months later down a path with my dog where I shook an angry fist at heaven and asked God if He was for real and if he was, “What do You want with me?”

I omitted the harsh words. But I did include what God immediately spoke into my raw grief:

I made eye contact with many and said, “Jesus wants all of you too; and you, and you too, and yes, you too.”

Eventually I connected the testimony of God’s love story in my life, the one that called me to choose the path of joy, to His love story that happened long ago on a hillside. It’s the one where Jesus was about to go off with His tired disciples for a rest, but instead He had compassion on a crowd that interrupted their plans, and later needed dinner.

Jesus asked His disciples “What do you have?” And He then let them experience what happens when we give God all that we have, even if it seems like very little, not enough or impossibly inadequate.

I told the story using green felt for the grass, wooden figures for Jesus and disciples and paper cups and paper cutouts for the baskets, fish, loaves. I told it in my own words as it was interpreted line by line by Kenneth. Women stood up, leaned in, listened closely to the English accent and interpretation.

I wish I could have stayed and led a small group afterwards like I do when I’m at a retreat in the US. Instead we left that space following prayer, a time of worship and a graduation ceremony for those who had completed Crossroads Bible study courses. We then departed for the maximum-security prison for another graduation ceremony.

To be continued tomorrow…

Laura DeGroot is a writer and speaker. She will be blogging throughout Crossroads’s trip to Kenya. Follow along here.