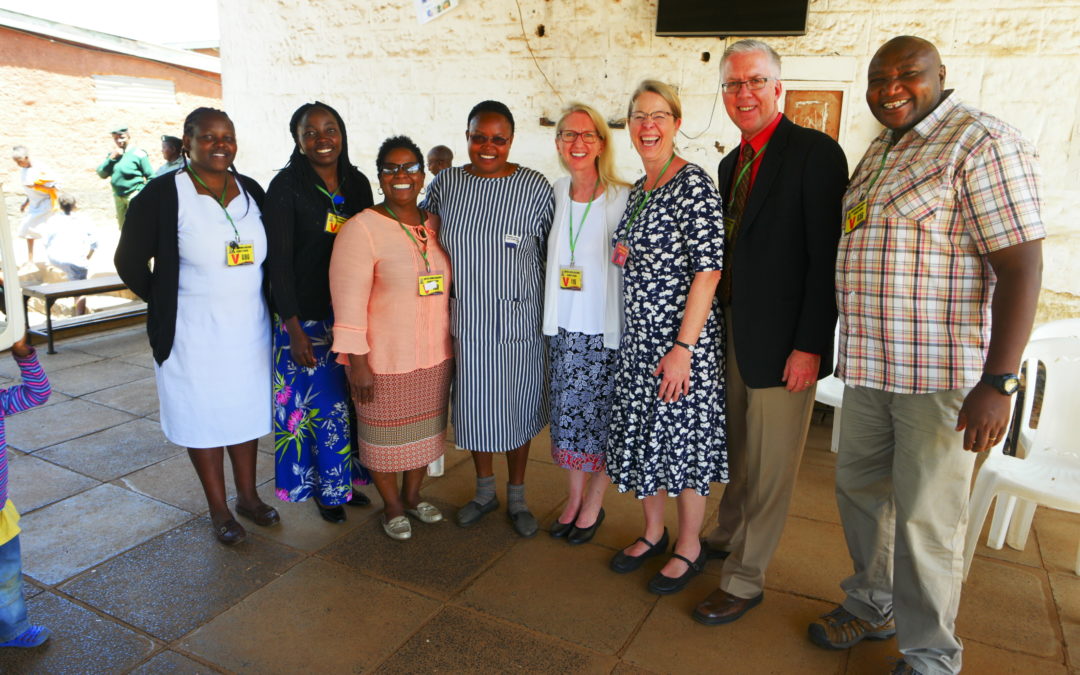 March 6 is an important date for Sarah, an inmate in Langata Prison, a maximum-security facility in Kenya. If you’re reading this and are a believer who prays, would you take a moment and write Sarah’s name down in your calendar and cover her with prayer that day, asking that she may be given mercy and released from prison?

She will have served an 18-year sentence for a crime that deserved prison. Someone from Crossroads Kenya will be at her review board hearing.

Today Sarah is not the same as the day she arrived at Langata. She has been changed by the love and forgiveness of God. Sarah is a Crossroads Kenya student and has become an assistant inside the prison to Pastor Jefferson. She distributes lessons and collects lessons and has completed all the courses Crossroads has to offer.

Sarah was the only inmate we got to speak to personally and I wish I had been able to give you a video or audio recording of our conversation with this joyful woman. She articulated the impact studying the Bible has on women in prison.

Study of God’s Word gives hope in a place that can be hopeless, she told us. The lessons have a Roadmap, a daily devotional that Sarah says is vital because the women need a daily reminder of God’s great love for them. She testified to how God is authentically changing the hearts and minds of the women who are engaged in God’s Word. Sarah is so thankful to God and to Crossroads.

We didn’t have a long time with the large group of women in the maximum side of the prison. But there was enough time for worship. Toddlers played to the side of where we stood. One small girl came and took the hand of Beth (the wife of Jefferson, director of Crossroads Kenya) as we sang together.

In the middle of our introductions and before we were able to pray, the guards required the women to leave the platform, step off to the wide sidewalk and kneel in rows of four. They were then counted. As unsettling as it was to me, Jefferson explained this is a normal part of their day.

It happens often and it’s a security protocol. We are, after all, in a maximum-security prison. No one wants to be there. The children see their mothers kneel. They’re old enough to have seen it often. It’s as routine as brushing our teeth is for us.

Once the women returned, the graduation ceremony began. Many students had completed courses. Some had completed more than one course.

And some…well, when their name was read and when that woman didn’t stand, a voice in the crowd called out: “Home.”

Again, “Home.” When “home” was repeated, smiling women shook their heads yes. Occasionally they clapped. Each woman has the same hope. Home.

It’s the hope that keeps women like Sarah going. You are going to pray for her, right?

Our team then had lunch that Crossroads provided for the officer in charge, her deputy and about fifteen other officers. They shared what languages they spoke, each one at least three: their mother tongue, Kiswahili and English and often one or two other tribal languages.

They shared funny stories and what they did as officers at Langata prison. They asked about Trump and American politics. A few proudly claimed to be from Obama land.

I asked some of the questions that I brought along. There was a nurse officer who worked in the health clinic sitting next to me. She explained that the clinic provides preventative health care, care for minor illnesses and injury and counseling for inmates, staff and surrounding community members.

We discussed the mothers and babies. She shared how the babies received special nutritional food and milk. I asked about the babies. How long do they stay with their mothers? Where do they go when it’s time to leave the prison?

At three to four years of age the children go to another relative if that is possible. If a suitable relative isn’t available, the toddlers go to an orphanage. Yes, the now empty-armed mothers show up at the clinic for counseling. Yes, this is difficult for these mothers. Yes, it is best for the children to leave.

The officer in charge mentions a new law about to be passed that will require the babies to go between 24 and 36 months. I ask if she thinks that is a good law. She shakes her head yes, along with the rest of the group. She explains:

“By the time they are three or four, they begin to understand where they are living. It is not good for them to realize they are in prison. They see way too much. It is imprinted on them.  They will never forget. If they leave sooner, they may not remember as much.”

I imagine the pain for those moms saying goodbye to their children is far greater than the pain I experienced when I lost my three babies when they were born early.

The officer in charge ends our time together by stating how rare it is to share a meal with her staff. She enjoyed it, sees the value of this time and hopes for this to happen again soon. And of course, she is most thankful. Effusive thanks toward Crossroads Kenya and Crossroads USA is expressed each time we entered a prison.

Laura DeGroot is a writer and speaker. During a trip to Africa, she captured stories of what God is doing through Crossroads in Kenya. Follow along here.