‘I Did Not Know Such Love Even Existed’ 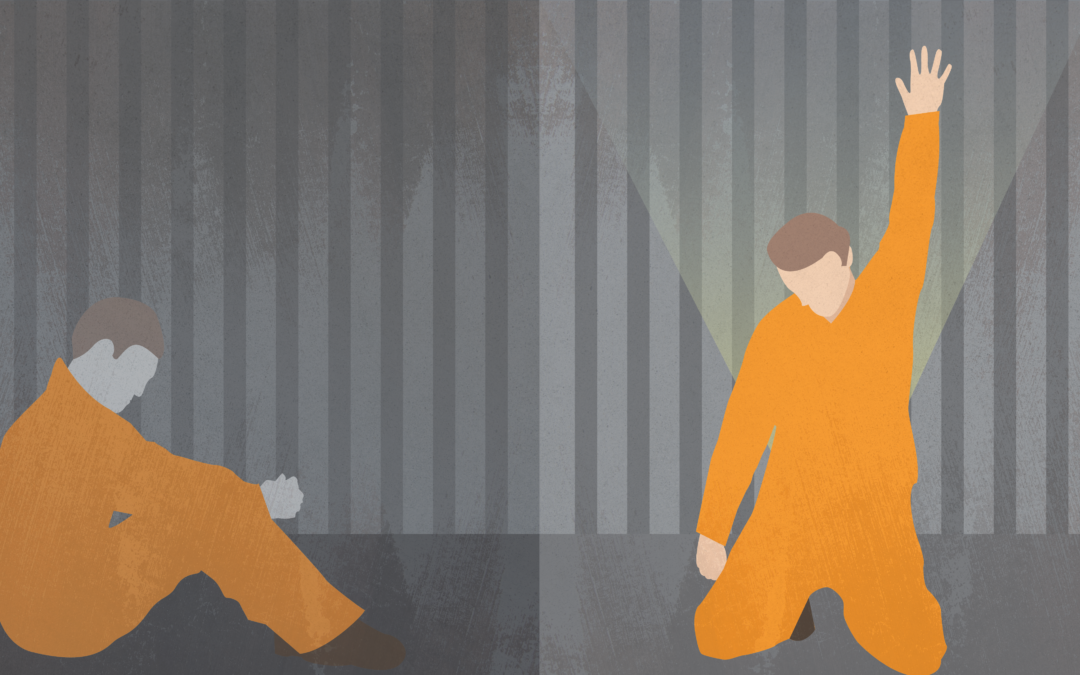 These were the words Terry heard over and over as he grew up. Longing for love from his father, he instead received emotional and physical abuse.

“I became angry and started hating my father, wondering why the person I call ‘daddy,’ the person who is supposed to love me and teach me right from wrong, was always hurting me and my mom,” Terry said.

Although he resolved never to become like his father, he found himself slipping into similar tendencies.

“I would mistreat my friends and anyone else who was around me, including my teachers,” he recalled. “I would do whatever I wanted to do, and I wasn’t going to answer to anyone.”

Terry decided not to answer to the law, either. In his twenties, he began to let “the devil’s cheap thrills”—including cocaine and prostitutes—lead him down a destructive path.

His mother visited him during his first stint in the county jail. He could barely meet her teary gaze as he promised her that he’d get clean. After his release, however, he fell back into his old ways.

“I got to a point in my life that I didn’t care about anything other than drugs and women,” Terry said. “I began using more and more—not only to escape my problems but to escape myself as I came to realize the self I had created. I was completely out of control.”

After surviving an intentional overdose, Terry had no choice but to face his girlfriend, who had discovered he’d been cheating on her. Fed up with a lifetime of poor decisions, he let his frustration and anger take control. He soon found himself in a cold, dark prison cell, facing twenty years for assault.

“In that small isolation cell, it dawned on me just how messed up my life had become,” he said. “There was a wrenching in my chest—an inner longing for God and a better way of life. I kneeled down on that cold floor and cried out, ‘God, I can’t do this on my own. I need You! Please take the pain, bitterness and loneliness away!’”

Instantly, Terry received an answer to his desperate prayer. He felt the Holy Spirit flood his heart with peace and love.

“It was like coming out of the darkness and into the light,” he remembered. “I felt like a whole new person.”

As he stood up, he noticed something. Someone had slid an open Bible through the crack under his door. As he picked it up, two highlighted verses caught his eye: “May the Lord answer you in the day of trouble. . . . May He grant you according to your heart’s desire” (Psalm 20:1, 4, NKJV).

Terry eagerly continued reading and studying his new Bible, confident that God had a better plan for his life. As he read, he began to discover the unconditional love he’d always longed for but never knew where to find.

“For most of my life, I looked for love in all the wrong places, with all the wrong things,” he said. “When I first read about love in the Bible, it appeared very alien, but at the same time, I was deeply inspired by the selfless grace and love of God. I did not know such love even existed. But the moment I accepted Christ into my life, I instantly became full of love.”

Several years into his sentence, he heard someone talking about Crossroads Prison Ministries. The word “crossroads” caught his attention, reminding him of moments when he had stood at a crossroads but had chosen the wrong path. He decided to sign up for the mentorship program.

“I received Who Are You? lesson 1, and I was struggling with some of the questions about me,” Terry said. “I thought about quitting, but I knew that’s what the devil wanted me to do.” 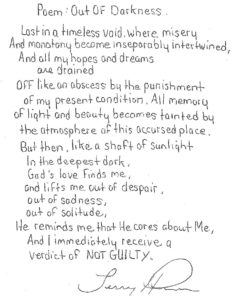 So he persevered, successfully completing Who Are You? The final Roadmap of the course asks students to reflect on John 8:11 and what it means to them that God has forgiven them. In response, Terry wrote a beautiful poem (see photo).

Currently, Terry is studying Great Truths of the Bible.

“My understanding of God’s Word is growing more and more,” he said. “It seems as if God is speaking to me directly [through the lessons]. His Word is coming alive.”

Terry has also been greatly blessed by the kind, encouraging words of his mentors.

“The mentors’ letters are so intentional; everything that’s written is so loving,” said Terry. “They explained the story of the prodigal son and that the Lord is an expert in forgiveness. They challenge me to live out my faith.”

And that’s exactly what he’s doing. Terry purposefully seeks out others around him whose struggles he understands deeply.

“I tell my story for God’s glory,” he said. “I want to use my broken pieces to help others who have been broken. I tell my fellow brothers, ‘No matter what your past is, it doesn’t disqualify you from God’s love.’”

Will you share the message of God’s unconditional love with men and women in prison? Sign up to be a Crossroads mentor.