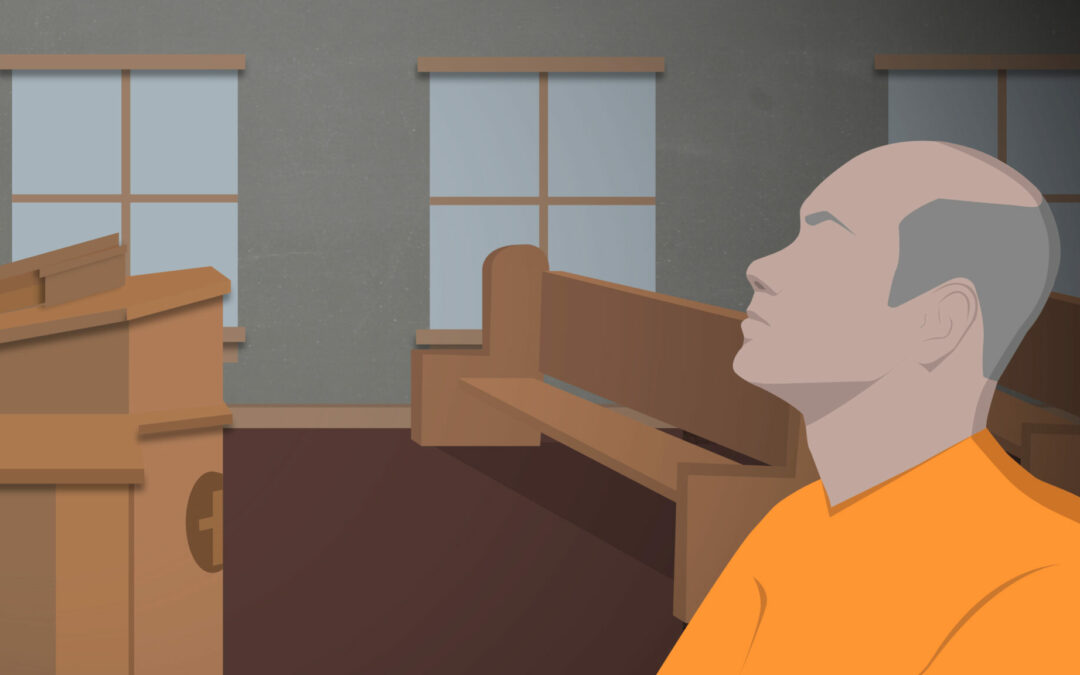 Vernon sat on his bunk in the psychiatric ward of Cook County Jail, alone and afraid.

“I was lost and just wanted to die,” Vernon remembered. His suicidal intentions had placed him in the psych dorm. “I knew my crime was going to take me to prison. The thought of twenty-plus years in prison starting at forty-four years old scared me.”

For the first few months of his fifteen months at the jail, as he went through court proceedings and waited to be sentenced, he refused to talk to anyone.

But one night, a man in the dorm approached him and asked if he wanted a sandwich. His name was Robert, and he had noticed that Vernon hadn’t been eating. Though Vernon declined, Robert persisted. Eventually, after several days, Vernon broke down and let Robert talk to him.

“Robert [was] a former member of a large, notorious Chicago gang,” said Vernon. “Retired—turned Christian. God had told him to talk to me.”

As Vernon expected, Robert asked if he was a Christian. Vernon said he knew who Jesus was, but he wasn’t interested. But Robert continued to stop by Vernon’s bunk regularly to offer words of encouragement and tell Vernon he was praying for him. He also invited Vernon to church every week. Finally, after several months, Vernon agreed.

“I said, ‘OK, Robert, it doesn’t seem like you’re going to stop until I go,’” he remembered.

The first service didn’t have much of an impact on Vernon, but he and Robert began a tradition of getting together in the dorm after each service to discuss the Scripture passage that the pastor had read.

Nearly a year into his time at the jail, Vernon was at a church service, sitting in the back row like he usually did.

“The pastor said, ‘I want to talk about forgiveness—not only for others but also forgiveness for yourself,’” he remembered. “I perked up and began to really listen. Before I knew what was happening, I was moving forward to the front row. I had to hear this message.”

After the service, Vernon answered the pastor’s call to come forward and accept Jesus as his Savior. Back in the dorm, he asked Robert if that was really all he had to do to become a Christian. Robert encouraged him to spend some time talking to God from the heart.

“So that night, after lights out, I slipped out of bed, fell onto my knees, and spoke with God,” Vernon said. “I told Jesus Christ that if I was now truly a child of God and was saved and born again, from this day forward, I would spend the rest of my earthly life serving Him.”

Soon after, Vernon signed up for the Crossroads mentorship program. The correspondence program followed him to prison after his sentencing, and he faithfully worked his way through the Tier 1 courses.

“This prison ministry has been very helpful in my Christian walk. Initially, I was oblivious as to what I needed to do, never having a church/biblical life before entering prison,” he said. “After completing Tier 1 and moving on to Tier 2, I was given the most wonderful person as my guide, friend, and mentor, Ida. For the last six years, she has been along with me on my spiritual growth and journey. She has truly been a blessing placed only by God Himself into my life.”

Ida has walked alongside Vernon through challenging theological questions and difficult life circumstances, including his cancer diagnosis in 2017. When Vernon received the diagnosis and learned he would need to undergo a nine-hour surgery, he didn’t feel afraid—he felt strong and hopeful because of his faith in Christ.

“With wonderful prayer from Ida and my family and other Christian brothers and sisters, I came through it all,” Vernon testified. “It is only through the love of Christ that I am here writing this today. He walks with me daily, and I can say today, faithfully and honestly, that I trust Jesus in all aspects of my life and whatever comes next.”

Having successfully completed Tier 2 of the Crossroads program, Vernon is excited to move on to Tier 3 with Ida by his side. Thanks to the love and guidance of both Robert and Ida, he has come a long way since he began his spiritual journey.

“I have been incarcerated now for fifteen years, and as I look back, I realize that I am no longer the same person I was when entering prison,” he said. “In two years, I will be released, and I can now say, with the walk I have daily with Jesus, I am no longer afraid of what will be ahead of me.”

Spiritual mentorship is vital for new Christians as they strengthen their faith and grow closer to Jesus. Are you interested in walking alongside someone in prison on their spiritual journey? Learn more about volunteering as a Crossroads mentor.