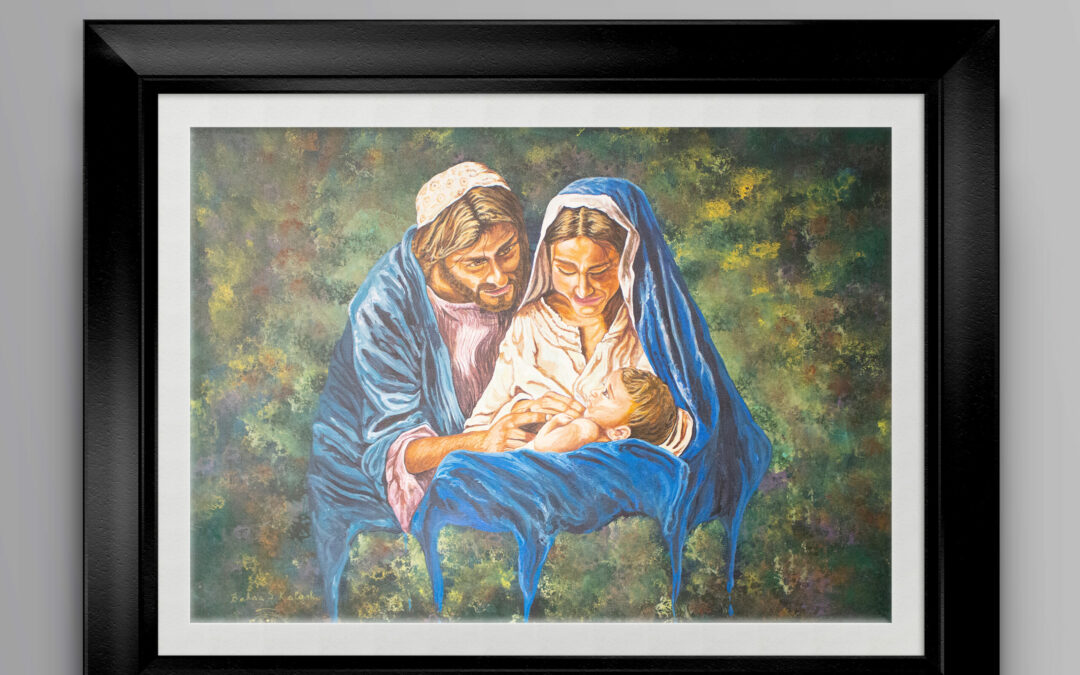 Bahaa was born into a Catholic family in Iraq. From an early age, his artistic abilities were evident, but because artistic expression was not considered masculine in Iraq’s patriarchal society, he was discouraged from creating art.

When Bahaa was 7, his family of six fled from Iraq to the United States as Saddam Hussein and the Ba’ath Party began persecuting Christians.

Five years later, when Bahaa was only 12, his father died in a car accident and he was taken in by an uncle. He quickly devoted himself to helping support his family financially by working at his uncle’s restaurant. This left little time for Bahaa to explore and develop his artistic abilities.

In his late teens and early twenties, Bahaa found himself entangled in criminal activity to help financially support his family and new daughter. As a result, at 22, he found himself serving a life sentence. In prison, Bahaa finally had time to develop his artistic talents. Inspired by phone calls with his daughter, he began painting things they talked about.

Four years into his imprisonment, his younger brother was gunned down after taking up some of Bahaa’s illegal business ventures to help support his family. Devastated by this loss, and worried for his family’s financial future, Bahaa threw himself into his art as a source of comfort. In memory of his lost brother and father, he signed many of his paintings with their names.

Nearly fifteen years into his sentence, Bahaa was moved to a maximum-security unit and was forced to forfeit his art supplies. He spent the next ten years with minimal possessions. During this time, prison officials allowed him to paint murals on unit walls. Officials and fellow prisoners began to respect and admire his work as well as his character.

In the early 2010s, Bahaa was encouraged by people in his life to continue developing his artistic abilities and offered to help him purchase supplies and display his work. In 2017, one of Bahaa’s friends shared one of his paintings with the Crossroads Prison Art Project and he began participating in Crossroads’ correspondence Bible studies shortly after.

Not long after starting his studies, Bahaa found his faith faltering after the loss of his mother and a mentor who served as a father figure to him. Around this same time, his request for a commutation was denied. As Bahaa processed these heartbreaking events, he found inspiration and motivation in his wife, daughter, son-in-law and three grandchildren.

In early 2019, he made a commitment to follow in the footsteps and legacy of his mother and mentor. Deeply remorseful for the actions that led him to prison, Bahaa longs to make a positive impact with his life. In his correspondence with us, Bahaa said, “It is selfless, God-fearing people such as [Crossroads’] giving volunteers that encourage” and inspire him to uplift others.

As a way of leaning into his artistic gift and loving his neighbors, Bahaa started a painting class for other prisoners to help them develop their talents. “This class consists of artists with various talents,” he wrote us. Bahaa pays for his students’ art supplies out of his own pocket and hopes to develop a way for his students to sell their work. He believes this helps boost their sense of self-worth.

A painting created by a student in Bahaa’s art class

As Bahaa teaches art, he also shares the hope of Christ with them and helps them recognize their God-given talents that can be used in positive and productive ways.

Recently, Bahaa has seen an increase in interest for his courses. “Because of the social distancing and us being indoors more, my art class has grown in number,” he wrote. The spread of COVID-19 at his facility has also caused many of his students to be relocated and has forced him to offer his classes to new students at three different units.

While these moves and transitions have been challenging for Bahaa, he is still having a powerful impact on his students. One of his students, Tony, told us, “Bahaa is a big inspiration to me because he taught me how to paint. I could not even draw a straight line before he took out the time to teach me how to paint!”

Several of his students reached out to us, mentioning how Bahaa takes special notice of the vulnerable people in his facility. They told us about how he protects and encourages his students with disabilities and mental health concerns. And they shared stories of his patience, generosity and inclusivity.

One of his students, Michael, wrote, “This past August I had just lost the most important person in my own universe, my mother . . . Bahaa was more than there for me, encouraging me, keeping me busy with art and keeping my mind right. I couldn’t begin to pay back what Bahaa has done for me since I’ve met him, and I’m more than privileged to have met someone who is so selfless, always trying to help out somebody.”

Another student wrote about how, as a result of their relationship with Bahaa and his constant pursuit of them, they began attending Bible studies and “have been closer to God.” Many of Bahaa’s students have also enrolled in Crossroads’ courses after joining his art classes.

Bahaa recognizes that he could dwell on the tragedy and pain he has experienced in life, but he chooses to look outward to bless others.

“I consider my students’ experiences in learning to create artwork with me important and inspiring. Many of these students are far less fortunate . . . Helping the least of these find value and purpose in their lives while in prison is what inspires me,” Bahaa said. “My intent is that my students will be able to find gainful employment when released from prison and make an honest living with their newfound skills and in the process become more God-fearing and gracious individuals.”

Do you want to encourage incarcerated men and women, like Bahaa, as they love and lead like Jesus in prison? Find out more about becoming a Crossroads mentor.