Crossroads Student: ‘I Have a Family Again’

Vinson found himself in prison again, convicted of driving while intoxicated—his sixth DWI offense. This time, he was sentenced to twenty years.

Looking back on this cycle throughout his life—getting arrested, going to prison, being released and then reoffending—Vinson realized something needed to change. 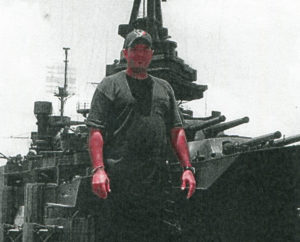 “Many people, like myself, followed the footsteps of our parents,” he says, recalling his childhood. “If they were Christians, so were you. Believe me, I would have rather ridden my bike than listen to some sermon, but I went.”

As he grew up, he attended church less and less frequently, only going on certain occasions to please his mother. He knew the basic stories of the Bible, but they didn’t mean anything to him.

Then he landed in prison.

“It was not until I came to prison that I picked up a Bible to really read it,” Vinson remembers. “I read it just to tell myself I read it. Kind of a conscience thing.” When he was released, he left the Bible in the cell.

Not long after that, he was arrested again. “Guess what was there waiting on me? Yes, that Bible I left behind,” he says.

So he read a little more. “I was really starting to focus on the message and not the words written,” he recalls. “Problem was that my mind was always focused more on what was out in the free world. I could not wait to get out and have another drink. And that is exactly what I did.”

This continued until he received his fifth DWI, which came with an eight-year sentence. “You would think any sane man would have had enough, but that was not the case for me,” says Vinson. “By now, ninety-nine percent of my family had had enough of my ways. Letters were no longer responded to.”

A year into that sentence, Vinson’s mother—his final contact in the outside world—passed away. “We were real close, so the loss was very hurtful,” he says.

With nowhere else to turn, he opened up the Bible again. He tried attending church at the prison but became disillusioned by what happened there under the guise of a sanctuary—drug transactions, gang meetings and more.

Once again, he was released from prison, and once again, he went back to his old ways, which led to the twenty-year sentence he is currently serving.

“It’s like I was searching for something but could not find it,” Vinson says. “One day I came across a Crossroads Bible study form and said to myself, ‘Let’s try this.’ Three years later, I’m writing you this letter.”

He started completing the lessons slowly and wanted to quit at times, but he persevered.

“Each letter and graded lesson filled me with inspiration,” he remembers. “The letters from my mentors brought tears to my eyes, knowing someone really cared. I had a family again!”

Vinson has successfully completed both courses in Tier 1 of Crossroads studies. “I’ve been here [in prison] over six years now, for a total of thirteen calendar years behind bars, and I can say that, with the help and guidance of these courses, I feel closer to God than at any other point in my life,” he states. “I’m freer than I have ever been in my life, and I’ve been in a 6’x9’ box for years.”

Vinson is grateful to everyone who has helped guide him to a new life in Christ. “For those of you who devote your time and energy to the Crossroads ministry, may God bless all that your heart desires,” he says. “Donors, contributors, supporters—there is no other Bible study I have ever come across that touches the lives of all those who commit to it. Your work changes lives. It changed mine.”

You can bring the message of freedom in Christ to people like Vinson by signing up to be a Crossroads mentor.