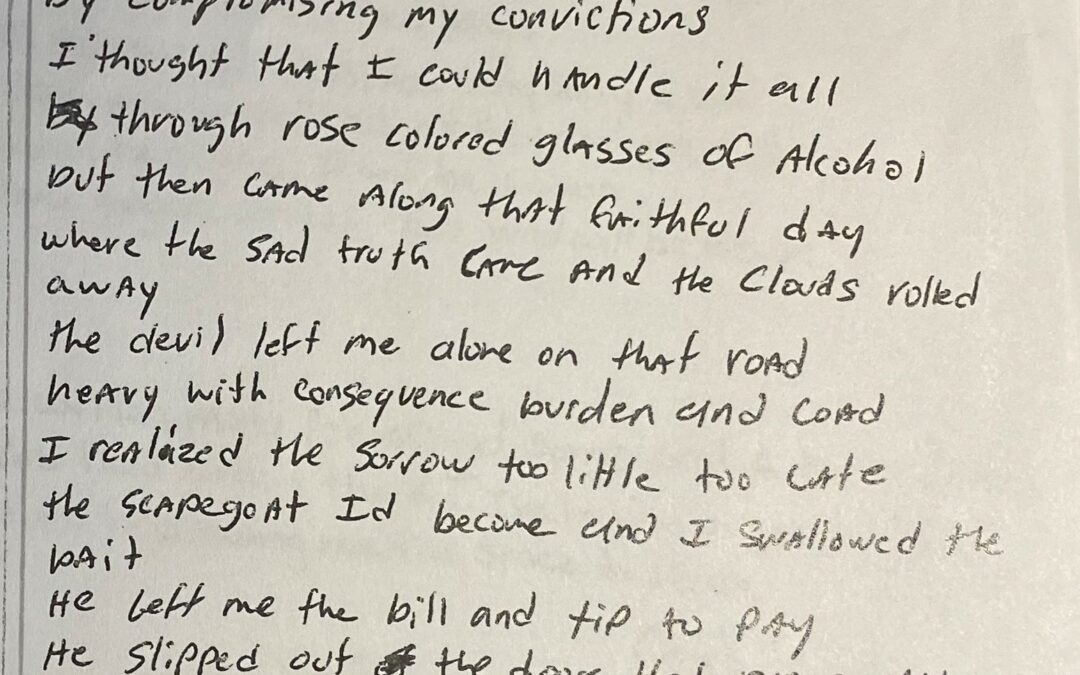 One year ago, Timothy responded to a prompt in his Crossroads Bible study with a poem about the day that landed him in prison with a life sentence. A husband and a father of two, he had struggled with alcoholism for several years, and he turned to alcohol in earnest in 2020 to avoid facing a pending divorce and other challenges. Despite two prior drunk-driving violations and a suspended license, he got behind the wheel of his SUV. Witnesses told police he was traveling at a high speed when he crashed into the vehicle of an elderly couple on a California highway, killing them. 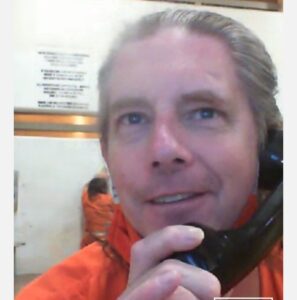 Timothy speaks with a visitor by phone from behind a plexiglass barrier.

Locked up with no chance at parole until 2045 and no alcohol to help him run away, he turned to verse:

I thought that I could handle it all

Through rose-colored glasses of alcohol

But then came along that faithful [sic] day

Where the sad truth came and the clouds rolled away

In the days immediately following the crash, his estranged wife, Melissa, visited him via video because she was the only family member permitted to have contact. She didn’t want to see him, but she was still his next of kin, and their daughters were desperate to know how Tim was holding up.

“As soon as I saw him, I forgave him for everything,” Melissa said in a recent phone interview. “He was so broken. He was a mess with bruises all over and a lump on his head. I knew he was at rock bottom.”

Melissa and Tim had attended church off and on throughout their life together, which began in the early 1990s. They had always considered themselves Christians. Yet Melissa said she didn’t know if Tim ever accepted the Lord until he became incarcerated.

Tim’s involvement with Crossroads cleared up any doubt in Melissa’s mind about his commitment to the Lord. He began studying Crossroads lessons when he was sent to live out his days in prison. He told Melissa that he really enjoyed doing the lessons. He talked about the lessons with other Crossroads students in his facility, and he encouraged others to sign up. Melissa saw a dramatic change in his outlook, and the couple began to read the Bible together and pray during their precious minutes together on the phone. Tim’s cellmate told Melissa that Tim was a great example to him, so much so that he ordered a Bible for himself.

“When you know someone who is in prison, you learn that prison is a living hell, but Tim had peace like he had never known. I know it’s the Lord and only the Lord that can give that kind of peace,” Melissa said.

This deep peace led the former steel construction worker to write spiritual poetry that he shared with his family and with us at Crossroads. We published his poem “Choices” in the January 2022 issue of Threads. He was proud to tell Melissa that he was a published poet, and he shared his copy of Threads with others in his unit. 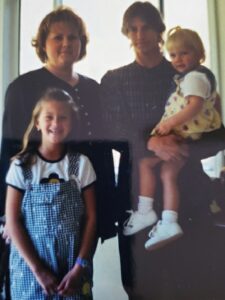 Melissa and Timothy, pictured with their daughters during better times in the late 1990s.

The poem publication was a bright spot during a difficult time for Tim. In January, he experienced an abscessed tooth. When the infection spread to his jaw, he was brought to the hospital for treatment. He also contracted COVID-19 during this time. After he was released from the hospital, he said he wasn’t getting his antibiotics from the prison medical staff the way he ought to. He told Melissa and his mother by phone in early March that he felt generally ill and that he was unusually anxious and agitated. Within days of those conversations, for reasons that are unknown, Timothy collapsed and died at the prison on March 11. He was fifty-two.

We learned of Tim’s passing when Melissa contacted us to request extra copies of Threads as mementos for the family. The published poem helps them to remember Tim as a redeemed, faithful, sober man. It assures them that he finally became the man they hoped he would be.

“Tim gave his life back to the Lord, and the Lord gave me a Scripture—Isaiah 57:1–2—that showed me the Lord took Tim to save him from evil that was to come,” Melissa told us. “I think it was going to be too much for him in prison. I believe Tim’s death was from the Lord. It was the Lord taking Tim to a better place where he doesn’t have to wear the chains of being in prison.”

We will never know if Tim had a feeling that God would take him, but the last line of the poem he wrote one year ago hints that he might have:

So now I sit in a concrete cell

Waisting [sic] away and living in hell.

But God rescued me!