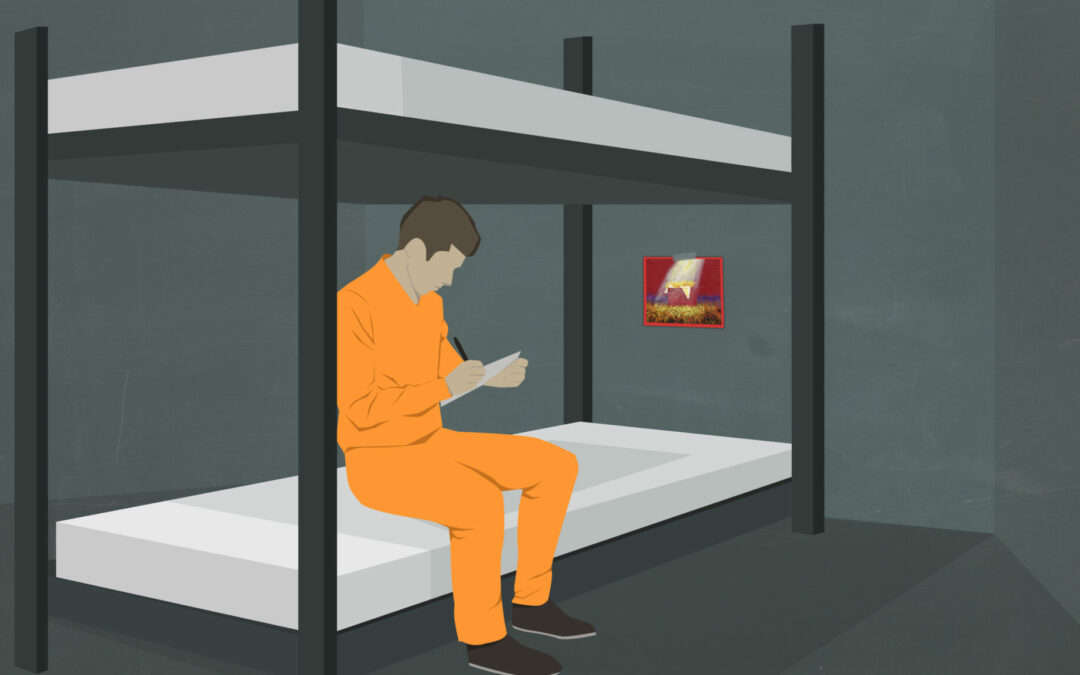 We receive dozens of letters from students every winter thanking us for remembering them at Christmas with a card. Last January, we received an especially heartfelt letter from a student named Mark. His letter of thanks opened a window into Mark’s life that we are honored to share with you.

Mark, thirty-six, started studying with Crossroads shortly after he became incarcerated in California in 2015. He is one of fewer than one percent of students to advance to Tier 3 studies. Tier 3 lessons take students deeper into theological studies and are considered college-level content.

Mark’s Tier 3 enrollment comes as no surprise since he excelled in high school, taking classes year-round so he could graduate a year early. Based on Mark’s testimony, it appears that school was one of the few areas of life that came easily. Outside of school, it was a different story. His dad split when he was young, and his mom was overwhelmed by raising Mark and his disabled older sister. A chaotic home life, poverty, several traumatic childhood experiences, and a debilitating head and neck injury as a young man coalesced to plague Mark with mental illness, which he tried to fend off and numb with alcohol and illegal substances.

“There’s something about a tree struck by lightning and never again being what it once was—always carrying with it that scar from that bolt that rocked it to its core. Mine is such a story in more ways than one,” he wrote.

Mark experienced brief periods of happiness in early adulthood, including the first two years of his second marriage and the births of his children. He had periods of stable employment. But turmoil in his relationships proved too much for him to handle. Strife at home fueled by substance abuse led to conflict. The conflict resulted in his arrest and a journey to rock bottom.

“It wasn’t until I was naked in a padded safety cell on suicide watch in the county jail that God found me,” he wrote. “In an artificial womb, where I was symbolically reborn, so to speak . . . I refused to eat until God told me what I was supposed to do with my life. A week later, I received the message . . . that if I was willing to repent and turn to Him, He was willing to forgive me—only now it had to be for real—all of me. I surrendered.”

A short time later, Mark signed up for the Crossroads mentorship program, which is his favorite Bible study of the many he has taken.

“I’ve done many other Bible studies offered to prisoners, but none of them are as interactive and thought-provoking, soul-engaging, mind-changing as Crossroads,” he wrote.

Mark savors the fellowship he experiences with his Crossroads mentor because he has no contact with his family and no one visits him. Mark’s anguish is amplified over the holidays because he yearns for his children and ex-wives to respond to his messages. He aches for some acknowledgment that they know he is deeply sorry and grieves for the harm he caused them.

Mark accepts that his family will likely not want anything to do with him when he is released in a few years. He also accepts that his children are growing up without him and will be teens and young adults by the time he is set free.

Shortly after Mark wrote to us to thank us for the Christmas card, he was attacked by another person in his facility. He wrote to his mentor, Ray, to tell him he couldn’t do his lessons, afraid he would lose his connection with Ray and with Crossroads. Mark was physically unable to complete lessons while he was in the infirmary recovering from a shattered jaw and nourished by a feeding tube. He has since resumed his studies.

Ray and Mark already had a strong bond before Mark was attacked, but the letters they exchanged while he recovered deepened their connection.

“Mark is a real nice guy,” Ray said. “I have a relationship with Mark that I haven’t had with other students. We bonded right away over our weaknesses and what each of us had to fight. Now he is like a brother.”

Ray said Mark writes frequently about his longing for his family to respond to his letters. Ray counsels Mark to keep trying and to continue praying. Above all else, Mark wants to be seen for the man he is today.

“No matter the mistakes I’ve made and the sins I’ve committed in my former state, I wish people saw this part of me, hidden behind all the quick judgments, instant discounting of me, considering me of little consequence in life,” he wrote. “I am a witness to the utmost reaches of soul suffering and pain—and therefore, by contrast, something of what real love ought to be. It is this that impels me now to live for Christ.”

Consider walking with students like Mark by becoming a mentor. To learn more, please call (800) 668-2450 or visit cpministries.org/mentor.