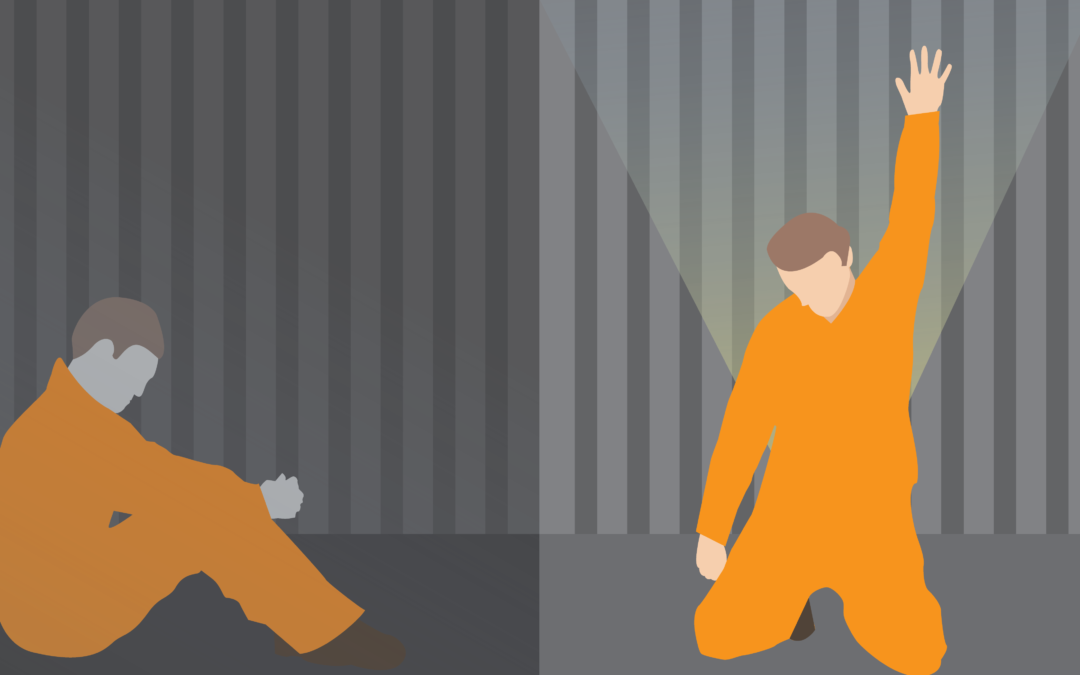 Paul grew up in one of the roughest neighborhoods in his city. “I was involved in gangs as a teenager and got in trouble in school, always fighting and hanging out with the wrong crowd, constantly getting suspended from school,” he wrote.

One of his friends, who shared his taste in heavy metal music, surprised Paul by inviting him to attend church with him. He protested, telling his friend, “I don’t do church, man.”

Intrigued by that first service, Paul kept coming back. “It got to be more of a habit to where I couldn’t get enough of it. I was hooked,” he said.

Once he became a member, Paul explained that his life took “a turn for the worse.” As he kept attending services and became more involved with the church, he felt himself filling with anger and hatred that he ended up pouring out on his family.

Easily provoked, he became abusive. “I was very disrespectful to my mom and dad, and all my brothers and sisters were afraid of me,” he wrote.

After one argument, he felt like a force had taken over him as he physically attacked his mom. “I was another person that day,” he shared. “All I can remember is my mom screaming, using her hands to block her face from me hitting her. I was out of control.”

He continued to attend the church while keeping his membership a secret from his family and getting in trouble with his friends.

He got married young and had his first daughter when he was twenty-two. During their marriage, Paul continued to live life for himself, staying out late and cheating on his wife. Still struggling with his anger, he and his wife argued constantly and ended up divorcing after Paul spent time in jail for assault.

The divorce still wasn’t the wake-up call that Paul needed. “I wasn’t giving up my lifestyle, and I wasn’t in my daughter’s life because of my pride, arrogance and stupidity,” he wrote.

Shortly after his divorce, he married again, but his second marriage didn’t work out any better than the first because he continued to live the same lifestyle. “At the time,” he said, “[Satan] was like my god.” Eventually, the choices he made because of that lifestyle landed him in prison.

“[When] I first got to prison, I was still the same. I was full of anger and hate, and I would see all these inmates going to church with Bibles in their hands. Some even tried to preach to me, and I was very rude and would tell them to get away from me,” Paul said. “I told a lot of people in here, ‘I am a Satanist, and I don’t want to hear about your Bible. Keep it away from me.’”

For years, Paul stayed connected with his Satanist church through the mail and continued to reject those who tried to share the Gospel with him.

One day, a volunteer from a Christian organization visiting his facility saw Paul, standing aloof. When the volunteer called him over, Paul rudely shouted, “WHAT DO YOU WANT?” The volunteer said he had noticed Paul’s Satanic jewelry and wanted to talk with him.

“I sat down, and we talked, and he didn’t preach to me. He told me something that kind of shocked me. He told me that he used to be a Satanist as well,” Paul wrote. The volunteer proceeded to share his testimony with Paul, describing how his lifestyle had also cost him his life and freedom, and he invited him to attend a church service that night.

Paul decided to go to the service, thinking to himself that it was a waste of time. As the service came to a close, the volunteer called him forward to be prayed over. Reluctantly, Paul agreed.

“For the first time, I prayed, and I felt something come over me like a rush, and all I remember is that I was on the floor with tears coming out of my eyes,” he said. The volunteers praying over Paul explained that he had felt the Holy Spirit and that God loved him. They helped him accept Christ into his heart.

Paul told us, “From that point on, I gave up that life.” He threw away everything associated with his Satanic past and wrote to his former church to let them know that he was done and had given his life to Christ.

Paul turned his life around 180 degrees and hasn’t looked back. “My life has never been better,” he said. He is now plugged into the church in his unit, shares his testimony regularly and has joined several Bible studies, including Crossroads.

Paul has been studying with Crossroads for eight years, and he said, “All the years I have been doing these studies with Crossroads Prison Ministries [have] helped me build my walk and my faith in Jesus. . . . Over the years, the courses I have taken have really made a difference in my life. [They have] kept me right in my walk and my faith strong. . . . It has helped me build a relationship with my family and has reunited me with my daughter.”

After encountering God in prison, many men and women like Paul are desperate to learn more about Him. Crossroads helps those searching for answers to dig deeper into God’s Word while mentors walk alongside them, offering encouragement and support.

Would you like to make a difference in the lives of men and women like Paul? Consider donating or signing up to become a mentor through Crossroads.