Crossroads student inspired to give back 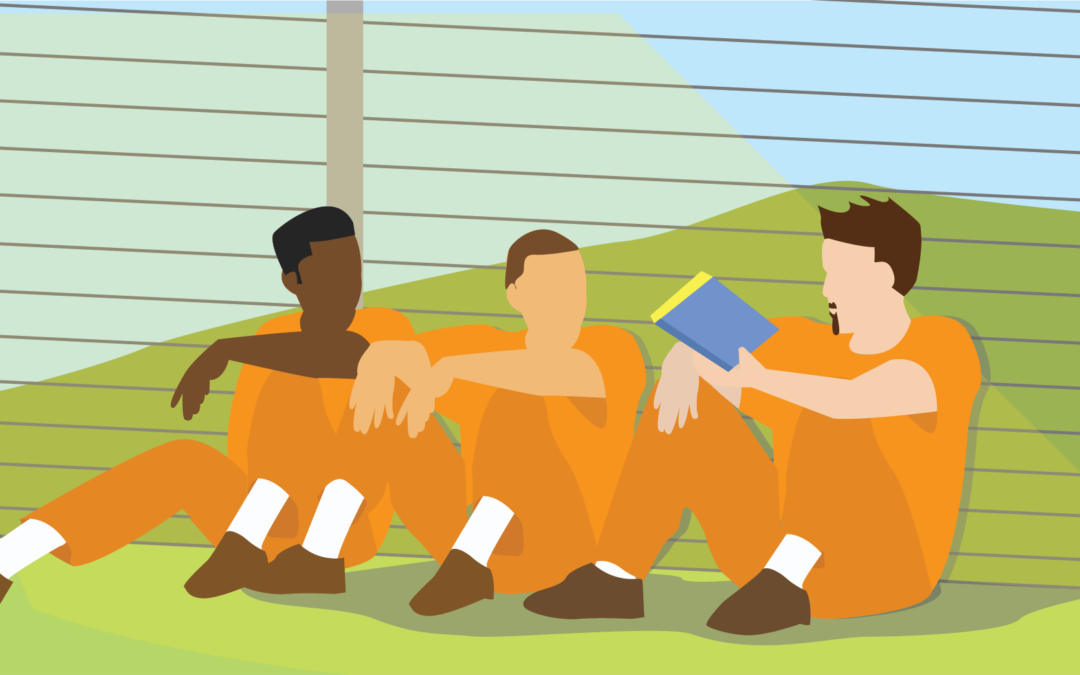 “I grew up in the midst of sin, hurt and chaos,” Joshua shared with us.

“My mom raised us mostly herself with intervals of would-be fathers. She tried her best,” he explained. “However, I had buried a lot of hurt and anger and became hard in my heart. On the outside, I was a pretty good student, nice, a hard worker and got along with most people, but on the inside, I was dying.”

Seeking an escape from the pain he felt, Joshua turned to drugs. By the time he was twenty, he had received a life sentence for a burglary turned homicide.

“As everything around me was shaken, the depths of my insides were plumbed, and I turned to the roots of my upbringing, which I had strayed from years before,” said Joshua. “As I read the Bible my mother had brought me, I was convicted all the more to face the truth and consequences.”

Aching with guilt and shame, Joshua returned to God.

“[I] confess[ed] my sin, and He truly worked repentance in my heart,” he wrote. “My hard heart began to soften. All the evil I had done and was capable of was contrasted against this goodness bestowed on me. I was overwhelmed! The message I received from the Bible and from some of my loved ones was that I could be forgiven—even redeemed.”

He continued, “I [had] hit rock bottom, and all I could do was look up. When I did, I saw Jesus Christ, God’s Son, on a cross, bearing my punishment of death so I could be given peace with God. . . . This was made all the more real to me when I had to sit before a judge and the government. I was convicted of my crimes in my heart and by evidence. I really deserved death but was shown mercy and grace.”

Determined to use his time in prison for good, Joshua immediately began plugging into faith-based mentorship programs like Crossroads. “I decided to embrace this prison time and become better, not bitter,” he explained.

“All during my prison time, I had people mentoring me,” Joshua recalled. “Some were inmates helping me act wisely and deal with tough problems. Others were from the free world, three of which were pastors. They all were there to listen, encourage, rebuke and really invest their time and energy into me. I really believe that my success in here or in the free world will be because of the wonderful relationships I invest in and them in me.”

One of the people who has invested in Joshua’s life is his Crossroads mentor, Nancy. Since enrolling with Crossroads in 2005, Joshua has completed over eighty lessons, nearly half of which have been reviewed by Nancy since she became his mentor in 2014.

“Joshua is an excellent student,” Nancy told us. “In his letters, Joshua usually lists prayer requests for family members, friends and fellow inmates. He prays for their health [and their] material and spiritual needs. Joshua’s concern for others shines through. Working through these lessons with Joshua has been an encouragement for me, and I have learned from his insights as well.”

As people like Nancy have poured into Joshua, he has spent his time investing in other people, discovering the joy of service as both a tutor and a Braille transcriber. “As I reach out to go higher, I am also reaching down to pull someone up,” he explained.

After meeting a group of deaf men in his unit over nine years ago, he took on the task of learning American Sign Language to help them study the Bible. “I believed I needed to learn their language. They were willing to teach and I to learn. In the process, we became fast friends,” said Joshua. “One day, the interpreter did not show up for the church service, so I filled in. . . . I have grown to love the deaf community. I see this as a part of my calling in life.”

Joshua has not only invested his time and his talents in others, but he has also invested his treasure. Recently, Joshua made a donation to Crossroads to support other students like him as they participate in our mentorship program.

“Crossroads has been a part of [my journey] for the last sixteen years,” he told us. “I have grown in knowledge, faith, conviction and joy because of you all. . . . Some of the big decisions in my life are due to submitting to the teaching of God’s Word through you all. . . . God has come alongside me to discipline, correct, lead and encourage me through His people that include my ever-encouraging mentors. Thank you.”

Reflecting on his life, Joshua shared, “My inner longing is to grow into the likeness of the One who rescued me. I want to serve the One who accepted me at my worst and gave me His best. I seek to succeed at discovering His plan for my life in here.”

Many men and women in prison are seeking the hope, guidance and encouragement of a mentor. With your support, we can provide fellowship to more students like Joshua in the year ahead. Learn more at cpministries.org/donate/postage